Sergeant Harold Russell lost both hands in a blast in 1944. He was equipped with a figure-eight harness that allowed him to open his hooks by moving the opposite shoulder. Through rigorous occupational therapy at Walter Reed Army Medical Center he relearned daily life tasks.

Army officials recruited Russel to be in a film about veterans with disabilities to inspire the 671,000 wounded American soldiers returning from war.

In the film, Russell says he wants to regain his independence, so he can smoke a cigarette independently. What occupations have you worked on with clients that others might find strange or unusual? Tell us about it using the form below.

Watch the 22-minute film below. Russell, who had no previous acting experience, won two academy awards for his role in the film. 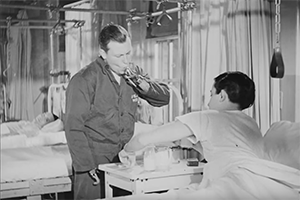