Memorable Clients: Interviews With the 100

Every occupational therapy practitioner has particular clients who stand out in their minds.

Karen Jacobs looks back not on a particular client, but on a meaningful activity: National School Backpack Awareness Day. “Reaching the wider population has always been my goal,” Jacobs says, “and when I started taking on leadership roles, I saw there was an issue we use to could reach a larger population.”

She recalls driving her children to school one day and seeing a group of children laden with backpacks. “One kid poked another—not maliciously—but the other kid’s backpack was so heavy, the child fell over. He looked like a turtle.”

Jacobs called then-AOTA Executive Director Jeanette Bair with the idea. She reached out to L.L. Bean about connecting the organizations and looked at the evidence in the literature.

“What made it so meaningful,” says Jacobs, “is that if you have an idea and you persevere; you investigate the literature and get the information you need to make a persuasive argument…occupational therapy can be spread so widely.”

After receiving a Fulbright to teach in Iceland, Jacobs brought with her Backpack Awareness Day swag—which featured a lightning bug wearing a backpack. “One of the students asked, ‘What is that?’” Jacobs recalls, because there are no lightning bugs in Iceland. So Jacobs worked with students for a new mascot that would be relevant to students there. “It’s being culturally relevant and culturally sensitive. We spent class time coming up with a mascot to represent health and wellness.” A student came up with the idea of an elf, which was then used on stickers.

“We made it a backpack week, and it’s going,” says Jacobs. “It opened the doors for occupational therapy moving into the school system. It’s all over Iceland.” 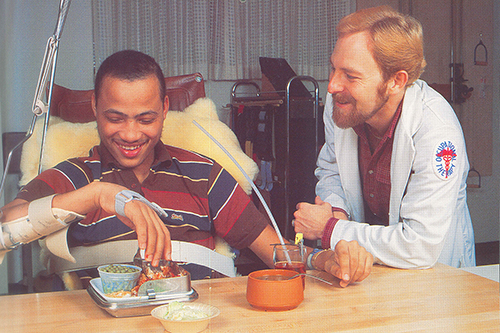 Stories
Some of the 100 most influential people in OT share about their memorable clients.
See all articles in
Stories