How OT Uniforms Have Changed: Your Stories & Photos

Occupational therapy practitioners shared photos and stories about how their “uniforms” have changed over the years—from white lab coats and stockings to miniskirts! Read their stories and check out photos of what OT practitioners wear to work today and how the uniform has changed in the past decades.

In 1976, Mary Jo McGuire worked in acute care, and she wore a white nurse’s dress, white hose, and white shoes. Today, as a home and community-based OT, she “morphs to the environment.” For example, “if I am doing a bathing assessment, I wear scrubs. If I am doing an initial evaluation, I wear professional casual with a name tag,” she says.

Nadine Mignardi started practicing in 1995 and wore a lab coat. Today, she wears “professional-lite,” which she says is more causal and allows her to kneel and bend (such as in the photo below).

Rick Shelton worked for the Veterans Administration (VA) in 1983 and wore white shirts, dark slacks, and “awful white shoes.” As an administrator, today Shelton wears a coat and tie.

Susan Garber wore a white, long sleeved, below-the-knee uniform and white shoes in 1965. The photo below is of Garber working with a client in 1968. Today, Garber works as a researcher and mostly wears suits.

Patricia Fingerhut wore mint green nurse's uniforms as a student in the late 70s. “I'm embarrassed to say the skirts were very ‘mini.’”

For his first job, Paul Fontana wore slacks, a collared shirt, and a white lab coat. Today Fontana works in an industrial OT setting and he dresses according to the weather (e.g., shorts in summer, jeans in winter). In this photo he was traveling on site to Alaska, where it was -65° F.

“When I was a COTA from 1976-1979, I wore a white uniform—dress or slacks, white stockings and shoes, lab coat with COTA patch, and name tag,” says M. Irma Alvarado. “Later, as an OTR working at the Shriners Burns Institute–Galveston Unit from 1982 through 1993, I wore scrubs with a lab coat with my name stitched over the pocket and bearing the OTR patch on the shoulder.”

Jane Musgrave wore a white lab coat in 1984 that had an OTR patch. Jane’s mother, Elizabeth Musgrave, was also an occupational therapist and is shown in the photo below in her uniform in 1944.

Susan Haiman wore a white “nurse’s” uniform for fieldwork. “The uniform actually made life easy, as one didn't have to make decisions about what to wear on a given day,” says Haiman. “Three uniforms did it—one clean, one dirty, and one for the day.”

Lora Foust wore slacks, blouses, and a colored uniform vest in the 90s. Each department had its own colored vest. Today, Foust wears business casual when she works in outpatient and inpatient therapy, such as in her photo below.

Carol Chamoff started her career in 1973 wearing a white dress, white stockings, and white shoes. “I recall that bending down without revealing too much was a challenge,” she says. The dress had an OT patch on the left sleeve.

Rhoda P. Erhardt worked as the chief occupational therapist at the Brooke Army Hospital Burn Unit in 1954. The photo below shows what she wore, which consisted of a white nurse's uniform and white shoes.

Barbara Schell wore a white uniform when she worked at a VA hospital in Tampa. Since then she’s worn white lab coats with OT patches, scrubs, and today she mostly wears easy-to-wash slacks and tops.

How has your occupational therapy "uniform" changed since you started practicing? Tell us here. 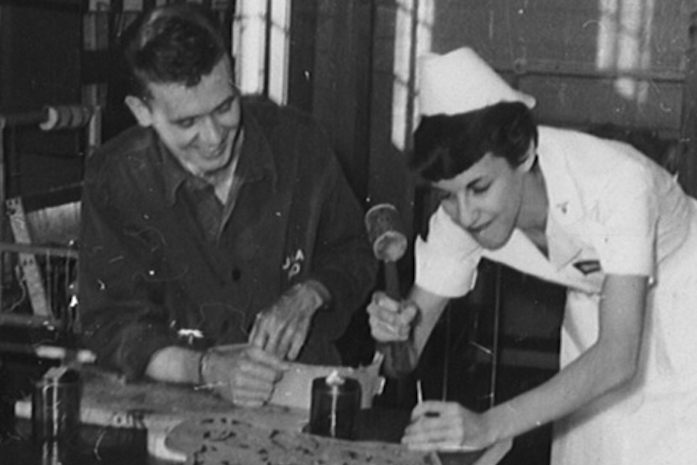 Interact
Occupational therapy practitioners shared photos and stories about how their “uniforms” have changed over the years—from white lab coats and stockings to miniskirts!
See all articles in
Interact