TED Talk: OT as Hackers and Makers in Accessible Design

Bill Gates and Steven Spielberg were in the audience as an occupational therapist talked about accessible design. The forum was TED2016, where Holly A. Cohen, OTR/L, ATP, SCEM, CDRS, program manager at NYU Langone Medical Center, adjunct professor at New York University, as well as the co-founder of DIYAbility, an organization that focuses on the education of health care providers and community members in the area of assistive technology and disability, delivered a TED talk. She shared the stage with the likes of Al Gore and Shonda Rhimes. After returning from Vancouver, British Columbia, where TED2016 was held, Cohen discussed the experience with OT Practice Associate Editor Andrew Waite.

Cohen: One of the TED fellows, José Gomez-Marquez, reached out to me. I’ve met him over the years at the Maker Faire in the New York Hall of Science where DIYAbility usually has a table. José runs an organization called Maker Nurse, which seeks to promote nurses who make their own client-centered devices. So we are always in the same space at the Maker Faire and José reached out about me doing TED.

Waite: How did you develop your talk?

Cohen: I shaped it into a talk about the inclusion of technology for people with disabilities and having them be part of the making process. I started by describing issues with accessibility in technology, including toys. One of the things we do at DIYAbility is toy hacking workshops (we are an approved AOTA provider for continuing education), educating the community about adapting their own toys.

Waite: What is toy hacking?

Cohen: Any simple battery operated toy has switches inside. So let’s say you have a dancing Elmo and the child with a physical impairment can’t hit the button in the foot. Well, it is pretty simple to take the toy apart, undo the switches, and then add a mono jack and plug in an adaptability switch. It’s not easy to find adapted toys at mainstream stores. And there are specialty stores that sell them, but often they are selling a $20 toy for $100. And you can do it for literally $2 in 10 minutes.

Waite: Do you have an example of clients you’ve helped?

Waite: What do you hope people took away from your talk?

Cohen: Just because someone is disabled doesn’t mean they can’t do something. It’s just that it has to be done differently. And there is no real reason why simple devices shouldn’t be made without different ways of accessing them. How ridiculous is it that there are toys made in ways kids with disabilities can’t access? There is nothing wrong with the child, there is something wrong with the toy. Disability is really created by people. We have to see people as people. They might have a different need, but they are completely capable of doing a lot of things we all do.

Waite: Any message you’d want OTs to take away?

Cohen: OTs were the original makers, and we don’t make as much as we used to. So I hope this sparks the idea for OTs that we can be making things, we can be doing these things ourselves. We have to embrace making again. We have to look at things differently, look outside of the box, and not go straight to the catalog.

This article was originally published in OT Practice. 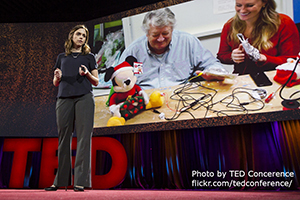